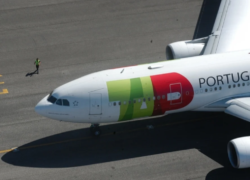 Portugal’s Prime Minister, António Costa, and the Minister of Economy, Pedro Siza Vieira, have admitted the possibility of nationalizing TAP Air Portugal, the national flag carrier, badly hit by the impact of the coronavirus outbreak.

“We cannot exclude the need to nationalize TAP or other companies that are absolutely essential for the country. We cannot risk losing them,” said Prime Minister António Costa.

Like many other airlines, TAP is struggling to survive the economic impact. As a result, it has requested State aid to secure its future, appealing to the government for a bailout. It was not made public how much support was requested.

In March, due to the collapse in travel, TAP temporarily laid off around 90% of its employees Accordingly, TAP has suspended its operations almost entirely, only maintaining domestic flights including to Terceira and Ponta Delgada, in the Azores, and to Funchal, in Madeira, and flight for repatriation and the transportation of humanitarian cargo.

Starting last week, TAP has resumed some of its international operations in Europe, with flights scheduled to London and Paris, while delaying its plans to launch the new Lisbon-Montreal and Ponta Delgada-Boston services.

Last year, TAP had announced two new nonstop routes from North America to Portugal to include Boston/Ponta Delgada and Montreal/Lisbon. The new routes, to be launched in the summer of 2020, were suspended.

TAP operated around 2,500 flights per week. North America was one of the company’s three main international markets. By the summer of 2020, in total, TAP projected to operate 82 weekly roundtrips from nine gateways in North America to Portugal.

TAP Air Portugal was partially privatized in 2015. Currently, the airline is 50% owned by the state (through state holding company Parpública), 45% by the private consortium Atlantic Gateway, and 5% by its workers.

The Atlantic Gateway is led by Brazilian-U.S. airline entrepreneur, JetBlue founder and owner, David Neeleman, who has a 45% stake in TAP. Neeleman is also the founder of Brazilian Azul airline. Under the Gateway consortium, the company was not well managed, even before the current crisis, suffering significant losses in both 2018 and 2019.

Before the pandemic outbreak, TAP Air Portugal operated from 7 airports in North America, 10 in Brazil, 1 in Venezuela, 16 in Africa, and approximately 70 in Europe. Visit TAP official website here.