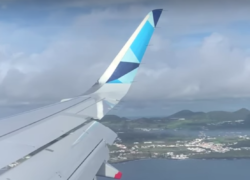 SATA Azores Airlines has temporarily suspended, effective September 1, direct connections between Terceira and Boston, and the Terceira to Toronto route, due to low occupancy rates, resulting from the COVID’19 pandemic.

“In July, the average occupancy rate on this route was 21% and, in August, to date, it has fallen even further to 17%. It would be a show of irresponsible management if SATA ignored this unfortunate reality. Thus, the Azores Airlines is forced to temporarily suspend this connection,” the company said in a press release.

“The Terceira-Boston connection is an important route for the Azoreans, for the Terceira people and for SATA, which, in normal times, will bring value to everyone. It happens that, due to the circumstances, that unfortunately we all live with the pandemic, the occupancy rates, in general, and of this route, in particular, have dropped dramatically,” the company reiterated.

In the meantime, the airline base in the Azores is working on the “rationalization of measures to continue to face the pandemic” and working with agents in the Azores, Terceira and North America “to resume as soon as possible, not just the Terceira to Boston.”

This announcement follows news that SATA was awarded a US$157 million grant in funding by the European Commission last week via the Portuguese Government. The funds are to help the airline restructure after losses caused by the COVID’19 crisis.

Daily flights between all the islands of the Azores also resumed, except for Corvo island with connections only on Monday, Wednesday, and Friday.

Of the four new 27 new cases, two were diagnosed on São Miguel, flowing a screening test carried out on arrival in the island. The other two positive cases were detected on the island of Pico, involving a 28-year-old man and a 24-year-old woman, who tested negative on arrival and positive on the sixth day upon arrival from mainland Portugal.

The 1,474 analyzes carried out in the region in the last 24 hours also revealed two recoveries, of two men aged 13 and 45 years.

Since the outbreak began, 16 people in the archipelago have died, all in São Miguel, and 154 have recovered, with the rest returning to their original destinations.

In mainland Portugal, 1,805 people died from 55,912 confirmed to be infected, according to the most recent bulletin from the Directorate-General for Health.

The COVID’19 pandemic has already claimed at least 820,000 deaths and infected more than 23.9 million people in 196 countries and territories worldwide.

219shares
Share this ArticleLike this article? Email it to a friend!
Email sent!