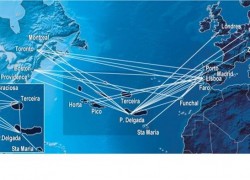 The Azores based ‘SATA International’ – also referred as ‘SATA Air Azores’ – has announced it is undergoing the process of changing its brand name and image to become “Azores Airlines.’

According to a source close to the process, the ‘Azores Airlines’ is not a new company, but the same company under a new name that will best represent its mission in the context of the Azores as a destination.

Managed by the SATA Group, the company was founded in 1941, as a private corporation, under the name ‘Sociedade Açoreana de Transportes Aéreos’ (SATA). In 1980, SATA became state-owned and run by the Government of the Azores in partnership with state-owned TAP Air Portugal, changing its name to ‘SATA Air Azores.’ In 1998 the company was renamed ‘SATA International.’

Based in Ponta Delgada, São Miguel island, SATA connects the nine islands of the Azores with mainland Portugal, Europe and North America.  SATA owns two tour operators in North America, the SATA Express in Canada and Azores Express in the United States.