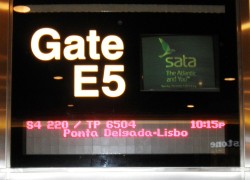 The Azorean airline SATA International has announced a new air service from San Francisco, California, to the Azores and Lisbon in partnership with Virgin America Airlines.

The new air service will connect passengers through Boston to Ponta Delgada, in the Azores, and Lisbon in mainland Portugal.  An estimated 300,000 people of Portuguese descent live in California, mostly in San Jose and Santa Clara.

Beginning January 2012, SATA International also formed a partnership with Canadian Westjet, the second largest Canadian airline, to provide more competitive rates on routes between the Canada and the Azores.

Under the agreement, SATA International offers air service connections between the Azores and Canada from Toronto and Montreal to places like Winnipeg, Vancouver, Calgary or Ottawa and also in the United States to destinations such as New York, Miami and San Francisco.

Travelers using SATA International can also purchase e-tickets, to and from the Azores, to new destinations within the United States including Chicago, Fort Lauderdale, Miami, Philadelphia, Orlando, San Francisco and New York.

SATA International has been connecting the U.S. and Canada with the Azores and mainland Portugal for more than 30 years in addition to a number of destinations in Europe and Brazil.

SATA International has a ticket office at 1897 Alum Rock Ave., in San Jose . For more information about booking flights visit at SATA or call 800-762-9995.