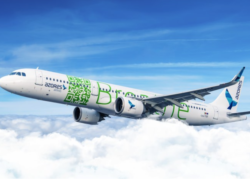 The route will be operated on Airbus A321neo aircraft with a capacity of 190 seats during the winter season.

“After performing, for the first time, direct flights between Madeira and JFK Airport, starting in November 2022, we create conditions to continuously expand connections from one station to another, which is important for those who want to travel and for the market, for the confidence it conveys,” said Eduardo Jeses, president of the Madeira Promotion Association.

For the winter season, the airline will offer transatlantic services to Boston (BOS), Toronto (YYZ) and New York (JFK).

During this period, 19 flights were operated and a total of 4,041 passengers were served.

SATA Azores Airlines served Boston to Funchal in 2005, 2006, 2016, and 2017, but its main routes to North America revolve mainly around Ponta Delgada and Terceira in the Azores, to Boston and Toronto. The airline has a long history of serving the United States and Canada from Ponta Delgada, in the Azores.