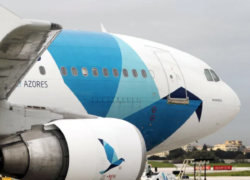 The service is not yet available, but the new route is expected it to be officially announced shortly.

According to the planned schedule, SATA Azores Airlines will depart from Funchal at 16:00, arriving at JFK at 18:50, and departing from JFK at 20:50, arriving in Funchal at 08:05 the following day.

Accordingly, SATA Azores Airlines has filed a request to operate between Funchal and New York JFK once weekly starting November 1st. The carrier plans to offer 21 roundtrips until March 23st, 2022.

SATA Azores Airlines operated from Boston to Funchal in 2005, 2006, 2016, and 2017, but its main routes to North America revolve around Ponta Delgada and Terceira in the Azores, to Boston and Toronto.

Currently, the Azores based airline offers five weekly Ponta Delgada to Boston and three weekly flights to Toronto. It also has a Terceira to Boston and Toronto service once a week until late October.

The airline has a long history of serving the United States and Canada from Ponta Delgada, the Azores.

**Report a correction or typo to editor@portuguese-american-journal.com.We are committed to upholding our journalistic standards, including accuracy. Carolina Matos/Editor.