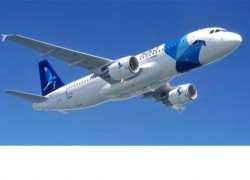 Starting in the Fall, SATA Airlines is offering a new one-stop destination to Madrid from Boston, every Sunday, with an easy aircraft change in Lisbon, Portugal, the company announced Wednesday.

Flights are competitively priced starting at $1,064, including tax, round trip.  SATA will also offer connecting fights on Tuesdays and Friday as well, the announcement said.

SATA Airlines, which has connected North America with Europe for more than 37 years, has been expanding its services range to include new destinations.

In April, SATA doubled its weekly service from the U.S. to the Azores and mainland Portugal, including a new non-stop direct flight to Lisbon.

SATA also formed a partnership with Canadian Westjet, the second largest Canadian airline, to provide air services between the Canada and the Azores. Under the agreement, SATA offers flights between Canada and to Azores though Toronto and Montreal with connecting flights from Winnipeg, Vancouver, Calgary or Ottawa.