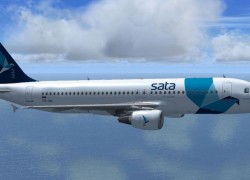 According to an analysis report released Wedensday by the CAPA Centre for Aviation, SATA Air Azores is actively seeking partnerships as it considers expanding its trans-Atlantic routes.

“SATA is considering cautious changes in its long-haul network,” the report says, addding that  SATA Air Azores’ CEO, Antonio Menezes, “wants to increase SATA’s load factor, which is around 75%.”

While partnerships will be important to SATA’s long-haul growth, as it seeks beyond gateway access, the report adds that “Given the size of the Azores, it is difficult for the carrier to sustain service to a long-haul point without feed, especially given the seasonal nature of its business.”

Describing the Azorean airline as “ambitious and successful,” the study also stresses that SATA’s focus is bringing tourists to the Azores. “Some 80% of SATA’s traffic is inbound tourists. Tourism to the Azores increased significantly from 200,000 in 2000 to 340,000 in 2011, making it a small but healthy tourist destination, and about half of the visitors are Portuguese.”

The study also points out that, “This compares to nearly eight million foreign tourists to mainland Portugal. For comparison amongst island destinations, the Seychelles receives 208,000 and the Maldives 958,000 visitors.”

SATA’s existing partnerships besides the codeshare with TAP are interlines including US Airways and Virgin America in the US, WestJet in Canada, airberlin from SATA’s German gateway in Munich, Aeroflot and Gol. The partners generally serve their home domestic markets but SATA is also interested in using Germany as its virtual hub for Central Europe.