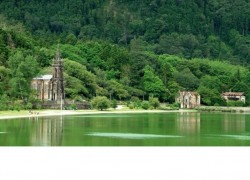 The people of the Azores are becoming more conscious about the effects of pollution on the ecosystems of their islands and are taking action to restore the balance between human intervention and the natural environment.

To preserve the archipelago’s natural resources, the Regional Government of the Azores has created the Natural Parks of the Azores, a network system of nature reserves designed to providing permanent sustainable management to the biodiversity of the islands.

Launched in 2007 and inaugurated in 2011, the Furnas Monitoring and Research Center (CMIF), located on São Miguel island, is an ambitious long term project already in progress to restore the original ecosystem of Lagoa das Furnas [Furnas Lake].

The Research Center is situated on the south margin of the lake, next to the Furnas volcano, one of the three active volcanoes on the island, monitored by the Center for Volcanology and Geological Risk Assessment of the University of the Azores.

The Furnas Lake area has been reclassified as a “Natural Park for Sustainability,” as part of the Natural Parks of the Azores management network, which goal is to provide the nine island archipelago with nature reserve areas.

Specifically, the Furnas Monitoring and Research Center is a Watershed Management Plan project aimed to address the eutrophication of the Furnas Lake, a process by which a body of water acquires a high concentration of nutrients, causing its deterioration. 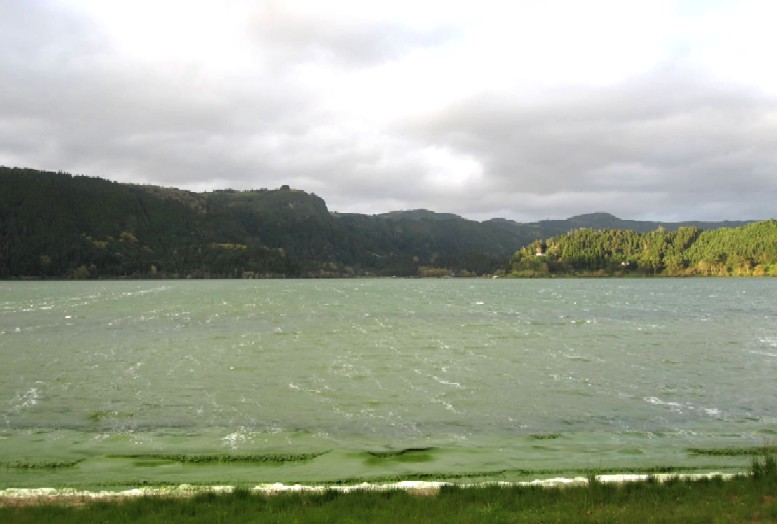 Furnas Lake with signs of eutrophication.

The Furnas Lake, the second largest lake on the archipelago, holds over one million cubic liters of water. Currently, its ecological status has been downgraded to “bad,” due to the growth of algae, a process which increases the drop in oxygen in the lake water.  As a result, the water becomes blurred and loses volume.

Five hundred years of human occupation of the islands – discovered and populated by the Portuguese in the 15th century – have taken their toll on the local fauna and flora.  Consequently, the delicate balance of the Furnas Lake ecosystem has been damaged by fertilizers from farming inside the watershed area and from the spreading of non-native vegetation.

There are 4,467 species and subspecies of terrestrial plants and animals known to inhabit the Azorean archipelago of which only 420 are endemic.

The main goal of the Furnas Monitoring and Research Center project is to clean the water basin, to restore the original habitat of the lake and to recover and preserve the ecosystem of the whole area, considered one of the major tourism attractions on the island.

So far, the area surrounding the lake has been completely cleared of intrusive non-native species. Trees that are not endemic or desirable are being removed, while hundreds of indigenous trees, including fruit trees, such as heirloom apple trees, are being planted.

Over fifteen thousand trees and shrubs, of seventeen different species, have been already planted on the banks of the Furnas Lake, while equestrian paths and walking trails are being created.

The Azores islands hold 88 lakes and lagoons which are considered crucial for the sustainability of the islands’ ecosystem. They are monitored by the Water Framework Directive, issued in 2000 by the European Parliament and the Council of Europe, which aim is to protect Europe’s aquatic systems. About 95% of the funding for the Research Center and planning projects was provided by the EU. 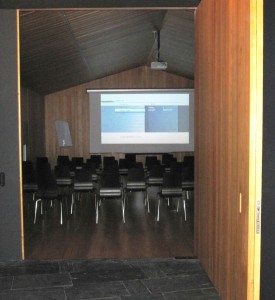 The Azores also hold a series of areas classified under UNESCO programs. Currently the Region counts with 12 Ramsar Sites and three islands (Graciosa, Corvo and Flores) have been adopted as Biosphere Reserves.

The building was planned to host a wide range of educational activities, including guided visits, meant to disseminate information for a better public understanding of the importance of the ecological preservation of the Furnas Lake. Admission is free. A donation of €2, 50 is discretionary.

(*) Carolina Matos is currently on assignment reporting from the Azores. She is the founder and editor of Portuguese American Journal online. She was the Editor–in-Chief for The Portuguese American Journal, in print, from 1985 to 1995. From 1995 to 2010, she was a consultant for Lisbon based Luso-American Development Foundation (FLAD). She graduated with a Bachelor’s Degree in Liberal Arts and a Master’s Degree in English and Education from Brown University and holds a Doctorate in Education from Lesley University. She is also an adjunct professor at Lesley University where she has taught undergraduate and graduate courses. In 2004, Carolina Matos was honored with the Comenda da Ordem do Infante D. Henrique presented by Jorge Sampaio, President of Portugal.