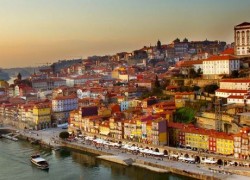 Porto, the second Portuguese largest city, was elected for the second time “Best European Destination” of the year, by the European Consumers Choice, it was announced Thursday.

Porto was first awarded the honor in 2012. Last year the title was won by Istanbul.

Porto won with 14.8% of the votes, followed by Zagreb, Vienna, Nicosia, Budapest, the island of Madeira, Milan, Madrid, Berlin and Rome the other destinations in the top ten. The voting was carried online involving multiple social networks

According to the European Consumers Choice, “The fact that Porto has once more been selected reflects well its fame, attractiveness and excellence as a tourist destination, as well as the dynamism of this sector with the greatest growth potential and which contributes most to national GDP.”

For three weeks, from 22 January to 12 February, travelers from all over the world voted online on their favorite destination among the 20 shortlisted to participate on the competition.

The city has undergone a remarkable renaissance in the last two decades. At the mouth of the Rio Douro, the hilly city presents a diversity of styles from narrow medieval alleyways to extravagant baroque churches, romantic little squares and wide modern boulevards.

The European Consumers Choice is an independent non-profit-making organization based in Brussels created to recognize companies skilled in producing innovative and intelligent designs for easy to use products. European Consumer Choice in partnership with tourism offices also rewards the best holiday destinations in Europe.