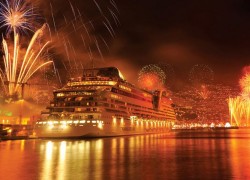 Madeira island was named ‘Best Destination to celebrate New Year’s Eve in Europe’ by the ‘European Best Destinations’ – a travel organization based in Brussels (Belgium) whose mission is to developed and promote culture and tourism in Europe.

Madeira is renowned for its New Year’s celebration festivities which include its famous fireworks display, officially recognized in 2006, by the ‘Guinness World Records,’ as the largest display of fireworks in the world.

According to the ‘European Best Destinations’ organization, “This magnificent scenario, of rare beauty, is simply unique, with thousands of multi-coloured lamps decorating the amphitheater of Funchal, transforming it into a grandiose stage. As the clock strikes twelve, on the 31st, the sky is lit up with colour, light and hope in a new year that is just beginning. Don’t miss it and come to live up this event in Madeira!”

European Best Destinations plays an important role in promoting Europe as the number one destination in the world. Since 2009 EBD has been working with major tourism offices in Europe to reward and highlight the most visited destinations via its website and social networks.

Madeira (population, 270,000), together with the island of Porto Santo, were known to the Romans as the ‘Purple Islands’ rediscovered (1418–20) by Portuguese explorers João Gonçalves Zarco and Tristão Vaz Teixeira.  In 1976, following the democratic revolution of 1974, Portugal granted political autonomy to the Madeira archipelago. As defined by the Constitution of Portugal, the ‘Autonomous Region of Madeira’  has its own government and legislative assembly. Madeiran immigrants in the United States are concentrated mostly in the New England and Mid-Atlantic States, Northern California, and Hawaii.