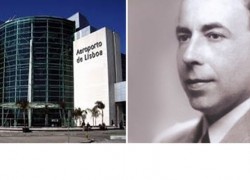 Lisbon Portela Airport  will be renamed after Humberto Delgado, a Portuguese Air Force General who presided over the foundation of TAP Air Portugal, the national flagship airline, the Portuguese government announced Thursday.

At a press conference after the meeting of Council of Ministers, Minister of Planning and Infrastructure, Pedro Marques said the Lisbon Portela Airport will be formally renamed “Humberto Delgado Airport” on May 15, 2016.

General Humberto Delgado (1906-1965), who was a staunch opposition leader during the Oliveira Salazar regime, is considered a national hero. This year marks the 110th anniversary of his birth.

Humberto Delgado, also known as the “General sem medo” (General without fear), due to his firm opposition to the authoritarian regime, served in 1952 as a Military Attaché and Aeronautic Attaché  to the Portuguese Embassy in Washington, D.C.

During his stay in the United States, Delgado embraced the American democratic ideals that inspired him to run as the democratic candidate for the Portuguese presidency in 1958.

After losing the election, he was expelled from the Portuguese military and forced into exile in Brazil and Algeria. In 1964, he founded the Portuguese National Liberation Front in Rome, Italy.

In 13 February 1965, he was ambushed and murdered in Spain, by the Salazar’s secret police, when he was trying to cross the border to Portugal clandestinely.

In 1990, Humberto Delgado was posthumously promoted to Marshal of the Portuguese Air Force, the only Portuguese career military to hold this rank.

Opened in 1942, during the Second World War, Lisbon Portela Airport is the main international gateway to Portugal and a major European air travel hub. It has been nominated as Europe’s Leading Airport for seven consecutive years by the World Travel Awards.