Travel: Lisbon named one of the most beautiful cities in the world – Portugal 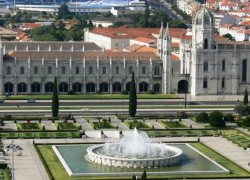 Urban City Guides online has named Lisbon fourth in its top 10 list of the  most beautiful cities in the world to visit after Venice, Paris and Prague.

Considering Lisbon one of the world’s “most scenic cities,” Urban City Guides  describes the Portuguese capital as being, “Magnificently sited on a series of hills running down to the grand Tagus River.” Lisbon is also colorful and rich in “beautiful unexpected views” found at “every turn down picturesque streets.”

Lisbon’s attributes also include, “an unpolished, seductive appearance; an effortless beauty with captivating details such as cobbled designs, tiled façades, and pastel-colored buildings blending together to give it a singular atmosphere now lost in so many other cities.”

For the Urban City Guides, “In such a stunning place, it’s no wonder that many of the world’s great explorers questioned what other beauties lied beyond the horizon when they departed from here in the 15th century.”

Rio de Janeiro was placed in fifth place, followed by Amsterdam, Florence and Rome. The ninth and tenth positions are occupied by Budapest and Bruges respectively.

Urban City Guides has also placed Portugal sixth in its top 10 list of nicest countries in the word to visit, after the United States, Brazil, South Africa and Germany and followed by Italy, Spain, Australia and Greece.

Urban City Guides online is a travel adviser dedicated to the modern busy traveler interested in visiting the world’s major cities. The site offers the best each city has to offer by providing travelers with the most reliable information about what they need to know before they visit the world’s most exciting towns.