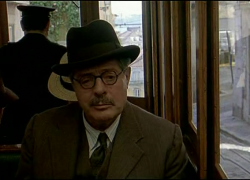 The film “Sostiene Pereira” directed by Roberto Faenza, with an award winning performance by Marcello Mastroianni, based in a novel by Italian author Antonio Tabuccchi, will be the first movie featured in the new “Lisbon Movie Tours” guided visits project.

“There are over 16,000 films that feature locations in Lisbon, above all from the 1940s and 1950s and almost all American films,” said Navarra.

The “Sostiene Pereira” film tour, launched Monday, offers visitors film takes in the Convent of Cardaes, Príncipe Real, the House of Alentejo, and the Chiado and Bairro Alto neighbourhoods of Lisbon.

Navarra explained that the tour, which took two months to organize, had in consideration the geography of the city, visitors profiles and the interaction between the film and the history of the locations being featured.

Each tour, taking one to two hours, is designed for small groups with a guide showing the respective scenes on site where the films were actually filmed.

The “Film of Disquiet” by João Botelho based on the Fernando Pessoa’s Book of Disquiet is due to be feature next in the Lisbon Movie Tours project. Maria de Medeiros’ “Captains of April,”  a film about the April 1974 Carnation Revolution,  is scheduled for April.