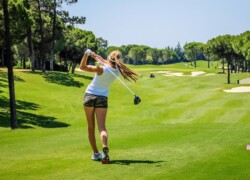 There are signs that the golfing sector, an integral part of Portugal’s vital tourism industry, may bounce back dramatically after Covid restrictions are eased and international flights resumed.

The pandemic has impacted heavily on the many golf resorts in the Algarve and elsewhere in the country. All of the courses are currently closed. Associated hotels are virtually empty as their restaurants, bars and other facilities are in lockdown. A reopening date has yet to be announced.

It’s generally recognized that golf is a sport that has been, and can continue to be, played safely during the Covid crisis.

The chief executive of the Portuguese Golf Federation has written to the minister of sport requesting the reopening of the golf clubs and explained how safe golf is with the necessary precautions in place. Players can easily keep the required distance and holes on the greens have been adjusted so no one touches the flags.

Even so, holiday golfers from the UK, a major tourist market, may not be permitted by the UK government to travel internationally before May 17.

In Spain, where the Covid-19 infection and death rates have been very high, golf courses have remained open even though the borders have been closed between Spain, Portugal and France.

The courses in Scotland have remained open too, while those in the rest of the United Kingdom have been closed since early January this year. English courses can reopen from March 29. An announcement about closed courses in Wales is expected on March 12 and the situation in Northern Ireland is to be reviewed on March 19.

A survey of 200 golf clubs in the UK concluded that 80 percent of them had a rise in membership last year, and more than a third of these reported a “dramatic” rise in membership. Despite – or because of the pandemic – nearly half of the clubs surveyed said they had an increase in green fee revenue and 33 percent said rounds were up “significantly” on the previous year.

Meanwhile, an “invasion” of holidaying golfers and their families is predicted in Portugal when international travel bans are lifted. Although mid-May approaches the end of the traditional spring golf season in this country, if the UK government lifts travel restrictions around then it will be welcome, particularly in the Algarve in the run-up to the crowded summer ‘sun and sand’ holidays.

Furthermore, the mid-February to May and September to mid-November golf seasons have been edging longer. This has encouraged more visits by families in which not all members play golf.

Another reason for optimism is that many potential visitors from abroad are simply fed up of living in lockdown and are anxious to get away. Far more of them in the UK than anywhere else are ready to do just that because they have already been vaccinated or are in line to have their jabs fairly soon. So, let’s see what happens in May if not before.

It’s not yet clear if the Portugal Masters, a PGA European Tour event and the biggest annual competition in the country’s golfing calendar, will be able to go ahead as scheduled at the Dom Pedro Course at Vilamoura in the Algarve from 28th April to 2nd May.

If the Masters does take place as scheduled, even without the usual big, live crowd of spectators present, it will spark interest internationally as it’s a top professional event televised and watched across the world, giving the Algarve good publicity as a tourist destination.

Golf has been fundamental to tourism in Portugal since the entrepreneur John Stilwell and his friend and famed golf champion Henry Cotton developed and opened the Algarve’s first 18-hole course next to the Penina Hotel in 1966. Today, there are 46 full-length or nine-hole courses located from east to west across the region. The Lisbon area has 25, Porto 10, Madeira five and the Azores three.

Every one of them is eagerly awaiting as many players as soon as possible – and so is the rest of the tourist industry.