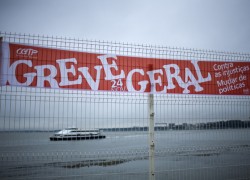 The Portuguese airport authority ANA recommended Monday that passengers confirm any flights booked for Wednesday, November 14, the day a general strike will take place across the country.

Portuguese flag-carrier TAP Air Portugal has already announced the cancellation of about 40% of its fights scheduled for Wednesday. SATA Air Azores has also issued announcements regarding the rescheduling of flights booked for the day of the general strike. There is also growing concern over the impact of the strike at the Portuguese sea ports.

Other airlines have said they were canceling flights on Wednesday due to a general strike called by unions in Portugal, Spain, Greece, France, Belgium, and Italy to protest government-imposed austerity measures and labor reforms.  The action was called by the European Trade Union Confederation (ETUC).

The Portuguese CGTP trade union confederation leader, Arménio Carlos, told Lusa that expectations for a large participation on the general strike were high because the majority of workers backed the cause and similar protests were taking place in as various European countries on the same day.

Portuguese workers “would not miss out on this opportunity to protest alongside others,” Carlos said. The protests will take many forms in Portugal, including stoppages, strikes and political rallies, throughout the morning and evening across the country.

Several transport companies have confirmed widespread cancellations, with the effects of the strike felt from late on Tuesday. Rail operator CP expects few trains to run on Wednesday, with some delays and cancellations from late morning on Tuesday.

Lisbon metro is to close early on Tuesday, at 10.30pm, and be out of action until 6.30am on Thursday; only 11 bus routes will be functioning in the city, with half the normal number of vehicles. Only some 15% of ferries between Lisbon and the south-bank suburbs will be running.

Porto metro will have limited services only on Wednesday, with the effects of the strike felt from 10pm on Tuesday. Just 10% of bus services will be running.

Last month, Portugal’s Parliament approved its state budget for 2013 with the biggest tax increases in the country’s modern history. These include raising tax rates on income, property and financial transactions. Some households will see tax increases equivalent to two months’ salary. The budget for 2013 also predicts unemployment will rise further to 16.4 percent next year from current 15 percent.

The last general strike in Portugal was jointly convened by the CGTP and UGT trade union confederations on November 24, 2011.