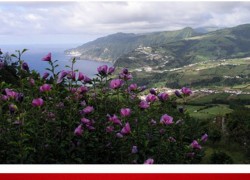 For Jamie Miles, editorial assistant at More magazine, the island of Flores, in the Azores, is one the world’s 18 most “exotic destinations for a sexy couple’s getaway.”

In broad strokes, Flores is described as “the western-most island in the Azores archipelago off the coast of Portugal. The island gets its name from the wild flowers (flores) that dot its landscape.”

Once there, those looking for love and romance will “get away from it all […] Sail the Atlantic, tour the quaint villages, or hike to the island’s seven natural inland lakes and numerous waterfalls.”

One of the nine islands of the Azores, Flores (area 143 km2/population about 4,000) is best recognized for its abundance of flowers. During the summer, the island is covered with thousands of hydrangeas. Flores is believed to have originated from a submarine volcano, 200 thousand years ago. Unspoiled and pristine, the island was chosen, in 2009, as one of several areas to be included on UNESCO’s list of World Network of Biosphere Reserves at the Man and the Biosphere Programme.

Launched in September 1998, More is an international women’s lifestyle magazine published once a month by the Meredith Corporation, with circulation estimated at over one million.  Read the full story >>