Travel: EasyJet ready to connect the Azores with the rest of Europe – Portugal 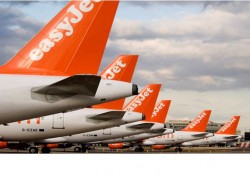 Javier Gandara, Easyjet general manager for Portugal and Spain, has stated recently that the London (UK) based airline is ready to open up a route to the Azores as soon as it gets approval from the Regional Government, as happened with Madeira.

According to Gandara, EasyJet has submitted a proposal to the Regional Government which it hopes will pressure Lisbon into opening up this route. He stressed that the permission for EasyJet to fly to and from the Azores would have positive benefits for both tourism and the Azoreans themselves.

Low cost flights to and from the Azores are in demand by the Azorean residents, entrepreneurs and tourism operators.  Presently, flights between mainland Portugal and the Azores are limited to two public airlines, SATA Air Azores and TAP Air Portugal. Both airlines are State owned and exclusively operated by the State.

According to Gandara, increasing competition and opening the door to low-cost airlines such as Easyjet would have advantages for both consumers and the local economy.  As a result the air fares would drop by an average of 30 percent.

Easyjet, Europe’s largest low-cost airline, has been flying off Portugal since 1999, currently flying from Lisbon, Porto, Faro and Funchal.  The company has estimated a growth for 2013 of 3-5%, with a target of 4.15 million passengers for Portugal.

EasyJet currently carries more than 3.4 million passengers a year to Portugal and expects to carry an additional 1 million passengers to and from Lisbon each year. With 15 existing routes originating in Portugal already, EasyJet will be able to connect to up to 10 new European destinations at low-rates from its recently established base at Lisbon Airport.

Founded in 1995, EasyJet employs more than 60,000 people, including 1,800 pilots and 3,300 cabin crew and has more than 182 aircraft in 28 countries.  It operates Europe’s No. 1 air transport network with a leading presence on Europe’s top 100 routes and at Europe’s 50 largest airports. The company flies over 200 aircraft on more than 600 routes between over 130 airports in 30 countries. More than 300 million Europeans live within one hour’s drive of an EasyJet airport, more than any other airline.