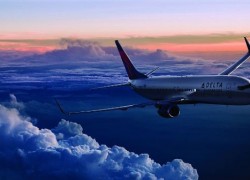 On Friday, May 25, Delta Air Lines arrived at the airport of Ponta Delgada, carrying 193 passengers, on its first flight between New York and the Azores.

The Delta seasonal New York route to Ponta Delgada takes place five times a week, except on Monday and Wednesday.

On the same date, Delta also launched a daily seasonal service from Atlanta city, in the United States, to Lisbon, mainland Portugal.

The new routes complement an existing daily flight from New York to Lisbon, launched in the summer of 2017 and resumed on May 3, 2018, as a year-round service.

Delta said in a statement that this year the company projects to increase its flight capacity to Portugal by more than 200% percent compared to 2017.

About 43,000 passengers flew with Delta between New York and Lisbon in 2017, answering to a 30% increase in the number of American travelers to Portugal last year. 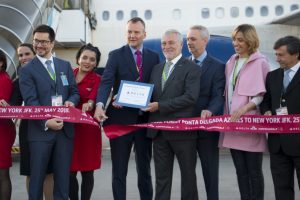 Although the new route connecting New York to the Azores Islands is currently seasonal, Delta has stated that “there is a possibility of the route extending to a year-round service.” Indicating that this option will be judged based on its performance over the summer.

From now on, Delta Air Lines will be competing directly with the Azores Airlines the only commercial airline currently providing direct flights from the United States to the Azores.

Part of the SATA Group, the Azores Airlines connects North America with the Azores and mainland Portugal for more than 40 years serving the nine islands of the archipelago. In addition, the the company also provides connections to Funchal (Madeira), Gran Canaria and Cape Verde.

In a recent development, United Airlines has also announced a number of new seasonal flights between the United States and Europe for the year. The new routes include service from Newark, New Jersey, to Porto city, Portugal mainland.