Travel: Dark side of ‘green list’ pandemonium – By Len Port 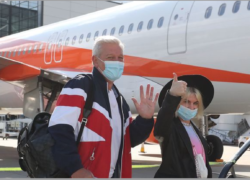 Many British visitors to Portugal are counting the cost of having to rush home early amid the chaos created by the British Government’s sudden U-turn on its ‘green list’ travel arrangement.

Among them is Tonia Christensen, who came to the Algarve, not to enjoy a getaway sunshine holiday, but to visit at long last her elderly mother who has dementia.

“I was last able to visit my mother in September 2020. I planned to do so in January and again in March this year, but easyJet cancel the two-way flights both times because of the COVID travel ban,” said Tonia.

“I booked again with easyJet as soon as it was announced that Portugal was on the new ‘green list’ as Britain lifted its overseas ban on May 17.”

Never mind that the cost of flights immediately soared, daughter and mother were desperate to see each other. Tonia, who had been fully vaccinated, resigned from a London university-based job to make the one-week trip.

The required PCR test before her departure last Friday would have cost £175 in Wimbledon, in the closest test centre to her home, so she made the one hour journey to Croydon where the cost was £80. 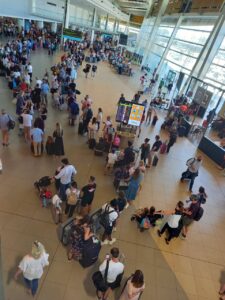 Shortly before she was about to fly from London Gatwick to Faro, the British Government suddenly downgraded Portugal to the ‘amber list.’ That meant Tonia would have to quarantine for 10 days upon returning home. That would not be possible because she had agreed to take up another sensitive job in London shortly after her one-week Algarve visit.

She had no practical choice other than to reschedule her return flight to Sunday. The airline said no seats were available on Monday. No refund on the original return flight was available, so she had to pay again in full for the rescheduled Sunday flight.

Now she would only be able to see her mother for one full day instead of a week.

The flight was not full but there was an hour’s wait in line at Faro for a previously-booked hire car. The receptionist mentioned without apology that the car’s fuel tank was empty. That might have been a concern for first-time visitors, but Tonia speaks Portuguese and is familiar with the whereabouts of local petrol stations.

The joy of getting together with her mother again was wonderful, but severely dented when as part of all the COVID restriction confusion Tonia realised she would have to take a lateral flow COVID test before flying home, as well as a PCR test within 72 hours of arrival in London.

By the time she had emerged from Faro airport with a car last Friday evening, the test centres in various Algarve localities were already closed for the weekend. All phone calls to test centres went unanswered.

Local newspaper reports warned that long queues for COVID testing at Faro airport meant that passengers had to wait for hours and in some cases missed their outgoing flights in doing so.

Even though lateral flow testing is supposed to be rapid, the reported long queues were confirmed in a phone call eventually answered by a very busy COVID centre official at the airport. The cost would be €30.

Tonia’s only option then was to leave her mother on Sunday morning, hours earlier than planned, in order to be sure to get a test and not miss her flight home before the 4.00am Tuesday June 8 deadline.

Her flight back, as were many others from Faro, was delayed by frustrated and confused queuing crowds.

“I sat on the plane on the tarmac for more than one and a half hours, surrounded by tired screaming children.

We were waiting for passengers who had been unable to get through the check-in on time. The Captain informed us that he had been instructed by easyJet to wait for all the remaining passengers.”

That wasn’t the end of the chaos, explained Tonia.

“Immigration at London Gatwick wouldn’t let me through because I hadn’t previously booked my second day PCR COVID test. I had to agree to and pay on the spot for a government home test before being allowed to proceed. That was another £88. Total cost just for testing: nearly £200.

“All this despite filling in passenger location cards for both the Portuguese and UK authorities so they knew exactly where I was!”

She was back in London, but the travel nightmare wasn’t quite over yet. There were no trains running into the city from Gatwick. In all, returning from Portugal turned out to be a 12-hour trip!

Meanwhile, responding to Portugal having been taken off the green travel list, top Portuguese health officials insisted that the British Government’s claims about increased rates of COVID infections and the prevalence of the Nepal mutation in Portugal were based on misinformation or lies.