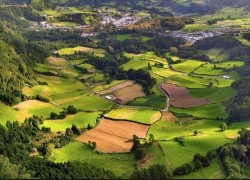 The Global Sustainable Tourism Review (GSTR), by QualityCoast, has listed the Azores as one of the most sustainable green destinations in the world and the leading 2014 European green tourism destination. The Azores ranked highest with a final score of 8,9 over a total of 10 points the highest global sustainability score by GSTR.

The top of the list also include other Portuguese destinations, namely as Cascais-Estoril, Lagos and the West Region (Oeste) in mainland Portugal. QualityCoast is the largest international certification program for sustainable tourism destinations.

The Sustainable Destinations Global Top 100 initiative, launched this year  for the first time,  aims to celebrate the management efforts of the most sustainable destinations on Earth. The list is the result of open calls in the social media, followed by a selection by 30 international tourism sustainability experts.

“The Global Top 100 aims to recognize tourism destinations that have worked hard to make a difference and take sustainability seriously,” said Albert Salman program director. “Nevertheless, no destination is sustainable for the full 100%.” This is why the Top 100 present ratings of overall destination sustainability according to the only available global assessment tool for this purpose: the Global Sustainable Tourism Review, GSTR,” he said.

“These 100 destinations stand out for making meaningful and measurable progress in their individual journeys toward greater sustainability,” said Durband CEO of the Global Sustainable Tourism Council.

The Azores is leading the European green tourism hit list since 2012. In 2013, QualityCoast had named the Azores the most sustainable tourism destination ahead of more than 1,000 other coastal and island locations worldwide.

Destinations are evaluated by an international team that used more than 100 indicators comprising all aspects of sustainability, including nature, environment, local identity and culture, tourism and business, local community and security.

The Azores administration has aimed at policies to exploring and optimizing renewable energy, in particular wind, geothermic and biomass. Currently 28% of the energy originates from renewable resources, targeted at 75% in 2018.