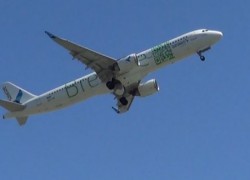 This summer the Azores Airlines will resume its very popular nonstop Providence service, from Green Airport to Ponta Delgada, Azores, for the convenience of the travelers in Rhode Island, Southeastern Massachusetts and Eastern Connecticut.

The airline will also offer 11 weekly flights from Boston Logan Airport to both São Miguel and Terceira islands. The flight time is only 4 hours.

“We have the seats available from late-summer and we have some great deals for August and September,” said Azores Airlines Commercial Director, Gavin Eccles. “If you have not yet booked, contact us, as if you have not been to the Azores you don´t know what you are missing,” he said.

Tickets are on sale now. Seats are still available. For this great deal call your travel agent or book your flight calling 800-762-9995. 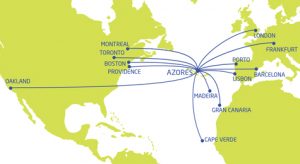 Azores Airlines also offers additional departures from Boston and Oakland, in the United States, and Toronto and Montreal, in Canada. Destinations include connecting flights to Lisbon, Porto, Madeira, Canaries and Cape Verde islands in addition to major European hubs.

The Azores Islands are closest point to Europe from the United States. The archipelago is an autonomous region of Portugal, just four hours by plane from Rhode Island.  Unlike anywhere else on earth, the islands are becoming increasingly well known for eco-tourism, golf, and unique European cuisine.

They also provide a variety of outdoors activities from light to intermediate hiking trails, including hiking to the rim of ancient volcanoes; biking, paragliding, birth watching, bathing in warm volcanic bubbling heated pools; sipping wine grown in lava fields while dining at majestic manor or Inn on a seaside village of fertile prairies, volcanic cones and craters, colorful hydrangeas and azaleas, 15th century churches and much more.

The Azores Airlines, part of the SATA Group, connects New England with the Azores and mainland Portugal for more than 40 years. The airline has announced a major aircraft lease, adding 2 new Airbus A321neos to its transatlantic network.  For more information about booking flights call 800-762-9995 or visit http://www.azoresairlines.pt.