Travel: Azores Airlines on strike from May 1 to May 2 – Portugal 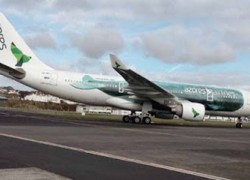 Cabin workers from SATA International / Azores Airlines have announced they will be on strike from May 1 to May 2 according to a statement released to the press by the National Union of Civil Aviation (SNPVAC).

The two day stoppage, which will include “all Azores Airlines/SATA International flights”, will fulfill only the “minimum services” of three daily flights, the statement said.

The standstill will also interrupt “additional services, such as assistance, reservations, on ground tasks, and any other tasks demanded by the management.”

The SNPVAC added that  during the stoppage, flight connections between Ponta Delgada and Terceira and mainland Portugal will be provided by other operators, namely TAP Portugal, EasyJet and Ryanair.