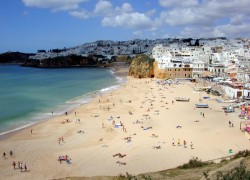 Portugal’s southernmost region of Algarve, a popular destination for tourism, was named one of the top preferred travel destinations for 2012 by the New York Times.

With a mild climate year-round — its temperatures fluctuate between 25 °C in winter and 48 °C in summer — Algarve comes in 29th place in a list of 45 ideal destinations which includes Florence, Vienna, Moscow and London.

Known primarily for its beaches, Mediterranean climate, safety, cuisine and relatively low costs, the New York Times describes Algarve as a “sun-drenched region” which attracts “a wider crowd as it recycles itself with a crop of new or renovated luxury hotels emphasizing style, authenticity and eco-friendliness.”

Tourism plays an important role in the economy of the Algarve making the region the most popular tourist destination in Portugal, and one of the most popular in Europe, receiving an average of 7 million foreign tourists each year. In total, including national visitors, almost 10 million people visit the Algarve yearly.

The Algarve is currently the third richest region in Portugal, with a GDP per capita of 86% of the European average. Many expatriates from England, Holland, Germany and the United States have chosen Algarve to live or retire where they enjoy a higher quality of life. British expatriates, followed by German, Dutch and Scandinavians, are among the largest groups settling in the sunny region of Algarve.