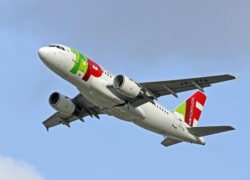 TAP Air Portugal has announced the suspension of 93% of its international operations, effective February 18 to March 30, above the 73% reduction previously forecast.

TAP chairman of the Board of Directors, Miguel Frasquilho and the chairman of the Executive Committee, Ramiro Sequeira, informed that, given the new COVID’19 travel restrictions and “a further drop in demand,” TAP decided “to suspend 93% of the total of its operation.” As a result, TAP anticipates to lay off 458 pilots.

It was also stated that TAP will maintain most domestic flights such as connections between Lisbon, Porto, Madeira and the Azores, and destinations with large Portuguese communities.

Despite the deep cuts in capacity, TAP will continue to fly some other international routes, namely to France, Italy, Switzerland and Spain in Europe and Cape Verde and Mozambique in Africa.

“We will ensure flights on all routes where they are possible, in order to respond to the mission of transporting our customers back home, and we will seek, together with the Portuguese and foreign authorities, to carry out humanitarian flights. and repatriation, whenever these are necessary, ” they guaranteed.

The carrier also informed that all reservations made can be changed free of charge.

It has been suggested that the pandemic could bring a new vision to the aviation sector in Portugal, and that a merger between TAP and SATA Azores Airlines, would be beneficial for both public run operators. The country does not have the dimension to have two public run aviation companies. This would allow for savings on insurance, fuel and other operating expenses.

The airline managers project that the recovery will be slow. However, “if the recovery takes place earlier than expected, we will have the capacity to respond to it, since we are scaled to the level of demand forecast for 2022, as foreseen in the restructuring plan,” said TAP manager Ramiro Sequeira.

U.S. citizens cannot travel directly from the United States to Portugal for non-essential travel such as tourism. Only Portuguese nationals, holders of Portuguese and EU-member residency permits, and holders of other long-term visas issued by Portuguese authorities may enter the country.

Among the new measures adopted to combat the pandemic, travelers are requirement to present negative tests on boarding, the imposition of quarantines, the ban on entry of travelers and citizens of the countries most affected by the pandemic, the suspension and ban on flights and mandatory confinements. For further information regarding traveling restrictions to Portugal and the Islands visit the US Embassy in Lisbon.

PAJ/Staff/This story is developing and will be updated.