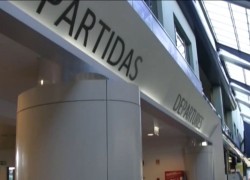 The 12 unions representing the 7,000 workers of TAP Air Portugal and SATA Group have called off the three-day strike planned for March 21, 22 and 23.

The strike was averted after a dispute over wage cuts was settled between the workers and the two companies on late Tuesday. According to a statement released by the workers’ representatives, “all conditions were met.”

The strike was called over concerns relating to budget reductions, layoffs and pay cuts between 3.5% and 10% in gross wages.

The strike, which would also affect Azores-based SATA airline, would be the first to be backed by all the unions representing TAP’s pilots and workers.

Stoppages called by TAP air traffic controllers, in April and May of last year, caused hundreds of flight cancelations. March has been marked in Portugal by transportation sector disruptions with a number subway and rail sector strikes.

Last December, Portugal postponed the privatization TAP Air Portugal alleging that the potential buyer didn’t meet the financial conditions.  The deal was part of the terms of multi-million Euro (€78 billion/$102 billion) bailout package Portugal had agreed, in 2011, with the IMF, the European Central Bank and its EU partners, aimed to reducing the national deficit.