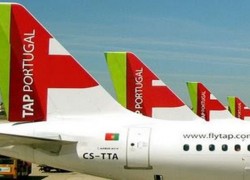 The Portuguese Civil Aviation Pilots Union has announced that TAP Air Portugal’s pilots will go on strike between May 1-10 grounding most scheduled flights.

Pilots at Portugal’s national airline are demanding to acquire 20% of the company when it is privatized later this year.

The walkout is part of a series of ongoing strike actions by public transportation labor groups resisting government efforts to reform the sector.

Around half of Portuguese train services were cancelled Thursday as workers with national rail company Comboios de Portugal walked out.

Trade unions oppose government plans to privatize the rail company, whose debts in 2013 stood at more than €4.4 billion ($4.7 billionUSD).

Poor working conditions, and the government plans to privatize TAP Air Portugal, were cited by unions as reasons for the strikes. TAP employs over 12,000 workers.

TAP Air Portugal privatization is part of plan to sell Portugal’s public assets to meet the obligations set by the €78 billion financial bailout signed by Portugal in 2011 with the European Commission, the International Monetary Fund and the European Central Bank.