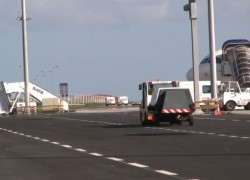 Flights to and from Portugal airports will be disrupted over three two-hour periods on May 24 and 25. Major delays and/or cancellations are expected following air traffic controllers walkouts.

This is the second round of planned strikes by the Portuguese Air Traffic Controllers (ATC) union with the first taking place on May 17 and 18 causing over 300 flights to be canceled and/or retimed.

According to union leaders, the strikes are the response to the “continued” lack of answers from the central government regarding “unparalleled instability within the company.”

International airlines have been cancelling services while others have retimed flights to avoid the stoppage periods. Travelers are advised to contact their travel agents or airline for further information before flying to or from Portugal.

In a different development, an ongoing partial train strikes limited to the Lisbon area are having mixed results, with many trains not running and passengers complaining about lengthy delays. The strikes are being called by ticket inspectors protesting against cuts in pay.