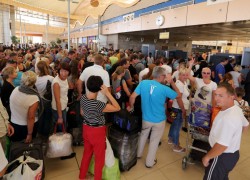 According to SITAVA, the airport workers’ union, Portuguese airport security screeners will be on strke for 48 hours at all airports in Portugal, including Madeira and the Azores, beginning on June 24 and ending on June 25.

These workers, who carry out security checks, are also staging demonstrations at the Lisbon International Airport on June 25, from 11:00am until 1:00pm, and at the airport in Porto from 12:00pm to 1:00pm.

They are also claiming that while rises in revenue from passengers’ fees have increased, Prosegur and Securitas “take advantage of workers” a situation that the union describes as “unacceptable.”

Travelers must be aware that baggage and traveler screening will take longer than usual and to expect additional time to navigate the security lines.