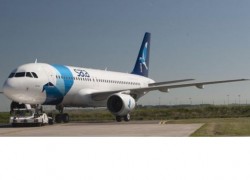 The National Civil Aviation Workers Union (SINTAC) issued Tuesday a strike action advance notice regarding a stoppage to be carried out by SATA Airlines’ workers from September 1 through December 31.

Workers have concerns over the labor policies drafted in a memorandum of understanding by SATA Airlines regarding working overtime, breaking time, on-call employee policies and working on holidays.

The labor dispute involves a discrepancy over work benefits allowed to workers at the national carrier TAP Air Portugal which do not apply to employees at the Azores based SATA Airlines. Both companies are public, owned and run by the State.

Strikes were staged by SATA Airlines’ pilots last April and May over the same concerns and also concerns regarding budget reductions, job security, layoffs and pay cuts between 3.5% and 10% in gross wages.

Based in the Azores, SATA Airlines provides service linking the nine islands of the Azores with Portugal’s mainland, Europe and North America.