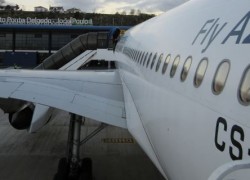 The cabin crew of SATA /Azores Airlines will stage a strike on August 23 through August 26 according to a statement released by the National Union of Civil Aviation (SNPVAC).

Grupo SATA advises all passengers with flights on these dates to change their travel plans without additional costs through the available sales channels.  Grupo SATA also stated it is making every effort to minimize the inconvenience caused by the situation.

The cabin crew of SATA /Azores Airlines had staged a strike on May 1 and 2 and again on June 1 and 2 , affecting more thousands of passengers.

According to SNPVAC, failure by the company to comply with several clauses signed under contract with the union employees, was the reason for the strikes, as well as the demand for better working conditions.

SATA/Azores Airlines has also launched a twice-weekly (Wednesdays and Saturdays) operation between Boston Logan Airport and Barcelona in Spain.