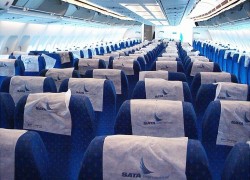 SATA International pilots announced Wednesday they have canceled the first three days of a three-phased nine-day strike planned for April and May.

They have also stated that the strike would only materialize if the issues underlying their pronouncement were not fully resolved to the satisfaction of SATA International pilots.

SATA International has been connecting New England with the islands of the Azores, year-round, for the past two-decades. It also operates longer-haul services to a number destinations in Canada and Europe. SATA International is the only commercial airline providing direct flights between the United States and the Azores.