Travel Alert: SATA International announced a six-day strike for April and May – Azores 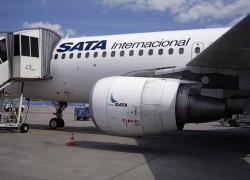 Pilots at SATA Air Azores and its subsidiary SATA International  have announced a joint six day strike for April  23, 24, 25 and on May 2, 3 and 4.

A  source of the Civil Aviation Pilots’ Union (SPAC) told Lusa that the decision was approved unanimously.

The strike was called over concerns relating to budget reductions, layoffs and pay cuts between 3.5% and 10% in gross wages. An impending SATA Air Azores strike was averted March 22, after the dispute had been advanced but not resolved.

All flights connect through Boston’s Logan Airport, where SATA International has non-stop three times a week service to the Azores with continuing service to Lisbon. In addition to a number of destinations in Europe and Brazil, SATA also offers direct air services Madeira and Porto from the Azores. Inter-island flights are offered to each of the islands in the Azores as well.