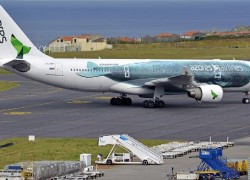 The cabin crew of SATA /Azores Airlines has called off a four-day strike scheduled for August 23 through August 26, the National Union of Civil Aviation (SNPVAC) announced today.

According to SNPVAC the move was a gesture of good will against the pressure the union works undertook from costumers and the general public.

“We received enormous requests from the diaspora, emigrants, from the residents of the Azores, invoking that this situation would bring serious damages to the public, not only to SATA, but to the public. Facing all these appeals, since SATA has demonstrated to have no good sense, at a general meeting we decided to demonstrate that we have it,” SNPVAC director Bruno Fialho told the press.

This would be the third stoppage this year of the airline cabin crew workers  who have staged a strike on May 1 and 2 and again on June 1 and 2, affecting more thousands of passengers.

According to SNPVAC, failure of the company to comply with several clauses signed under contract with the union employees was the reason for the strikes, as well as the demand for better working conditions.

“We will carry out new forms of struggle, namely another strike, perhaps in September, if the administration continues holding its irreducible position,” Bruno Fialho reiterated. “We will continue to demand compliance with the law, the company agreement and the protocols signed, using all possible forms of struggle,” he said.

SATA/Azores Airlines has also launched a twice-weekly (Wednesdays and Saturdays) operation between Boston Logan Airport and Barcelona in Spain.