Travel Alert: SATA Air Azores back on strike in May – more strikes on the way – Update 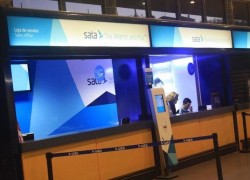 Pilots and cabin crews at SATA Air Azores and SATA International will be back on strike effective May 2, 3, and 4, following several rounds of  talks between representatives of five unions and SATA management. The unions decided for strike action after talks collapsed Tuesday.

SATA unions’ representative, Rui Luís, told the press that at the meetings with SATA management, workers were confronted with “more of the same.” He warned of more crippling strikes for the near future if the next round of talks fails to reach a compromise.

A three day strike was effective for April 23, 24, and 25, after an impending strike was averted March 22. The strikes are being called over concerns relating to budget reductions, layoffs and pay cuts between 3.5% and 10% in gross wages.

According to the company website, concerning all flights affected by the strike, ticket holders are permitted to (1) Voluntary changes for other dates (depending on the availability of the planned flights) within the period of 1 year;  and (2) Cancellation of the trip with full refund of the ticket.

The strike will affect travelers heading home for the Holy Feast of  Christ of Miracles [Festa do Santo Cristo dos Milagres], the largest religious celebration of the Azores, which takes place the weekend of May 4,  5, and 6. Nearly 400 years old, the tradition attracts many thousands of Azorean pilgrims returning home for the festivities.

Last year, SATA International called for a stoppage for April and May. The strike was phased out and called off as of May 17. SATA International is the only commercial airline providing direct flights between the United States and the Azores.

All flights connect through Boston’s Logan Airport, where SATA International has non-stop three times a week service to the Azores with continuing service to Lisbon. In addition to a number of destinations in Europe and Brazil, SATA also offers direct air services Madeira and Porto from the Azores. Inter-island flights are offered to each of the islands in the Azores as well.

For information regarding flight cancelations, rescheduling and refunding visit SATA’s website at http://www.sata.pt/en/content/warning-strike