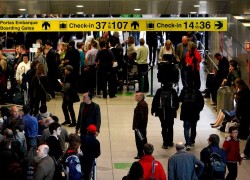 SEF is the agency responsible for the border control. During the strike, only one third of the agents will be processing their border control duties.

“The absolute lack of human and material resources provided to SEF’s agents to carry out their duties justifies the stoppage,” a representative of the work’s union said in a statement.

The union (Sindicato dos Funcionários do SEF) demands a reinforcement of 200 additional agents to meet the needs of an increase in the number of tourist arriving in Portugal daily.

According to union representative, Acácio Pereira, there would be “more delays and greater constraints” with the strike, but he assured that the SEF agents will continue to guarantee “minimum security conditions for all citizens of the country,” at a time when Europe is under threat of terrorism.

Airports of Portugal (ANA) has warned that “it is foreseeable” that the control of passengers by SEF will suffer delays. “Due to the strike called by the SEF for August 24 and 25, and the high traffic at airports at this time of year, it is expected that the passport control procedures provided by the SEF will be delayed,” ANA informed.

According to ANA,” passengers traveling to Bulgaria, Croatia, the Faroe Islands, Ireland, the United Kingdom, Romania, Russia, Turkey, Ukraine and all flights out of Europe will be affected.”