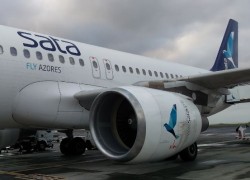 A catering company damaged a door of a SATA/Azores Airlines plane at the Lisbon airport on Monday. The incident affected the company’s operations on Monday and Tuesday.

“A catering company that was going to supply the A320 plane flight from Lisbon-Ponta Delgada, leaned against the aircraft and crashed into a door, damaging it,” said António Portugal, the company spokesman. “The door has to be repaired and the aircraft is out of service,” he added.

On June 7, passengers were left stranded overnight at Logan Airport after the plane was damaged by ground equipment while moving to the runway. The plane was bound to the Azores, Lisbon, Portugal, and Barcelona, Spain. Although nobody was hurt, the jet wasn’t able to continue the flight.

On June 25, a SATA/Azores Airlines plane drifted off its runway while arriving at Logan Airport in Boston, according to the FAA. The aircraft was able to return to its gate on its own power. The FAA is investigating the incident.

SATA /Azores Airlines has also launched a twice-weekly (Wednesdays and Saturdays) operation between Boston Logan Airport and Barcelona in Spain.