Travel Alert: Azores Airlines suspends flights to the US and Canada – Update 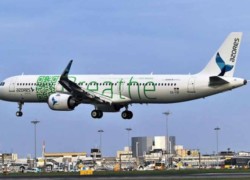 SATA Azores Airlines announced on Wednesday that it will suspend all flights to the United States and Canada, due to the COVID19 pandemic.

The Regional Director of Health told the press on Wednesday that the Azores have identified 2 positive COVID19 cases among 14 suspected cases. Currently, 430 people are under active surveillance in the Region.

Passengers can reschedule their trip for a later date, without penalty and without change in fare or request a refund voucher to use on a future trip.

Other operational changes include: (1) cabin baggage is no longer allowed, limited to a computer bag and / or a and bag; (2) 50% reduction in aircraft capacity, to provide greater spacing between passengers, so that the recommended social distance is maintained, with the occupancy of 2 + 1 seats per row, alternately; (3) on board service is also reduced, being limited to drinking water on flights up to 3 hours and a cold meal on flights longer than 3 hours; (4) in coming travelers will be required to self-quarantine for 14 days upon arrival.

The Regional Government has also given instructions to Azores Airlines to suspend its operation between Lisbon and the islands of Faial, Pico and Santa Maria (three of the five Azorean gateways) maintaining in operation flights between the islands of São Miguel and Terceira.

“We have to stop people circulating freely in the region,” said the official source.

The Regional Government has also recommended no traveling to and from the Region, except in an emergency, until 31 March.

The Regional Government of Madeira had one posite COVID19 case and is against traveling to and from the islands of Madeira and Porto Santo, except in an emergency, until further notice. The authorities have announced that all travelers arriving on the islands will be required to a mandatory self-quarantine for 14 days.

Grupo SATA Azores Airlines is the only carrier that serves flights between the Azores and the United States. The airline offers passenger and cargo transportation services and operates domestic and international flights in partnership with various other airlines and travel agencies. SATA Azores Airlines is headquartered in Ponta Delgada, São Miguel, Azores.