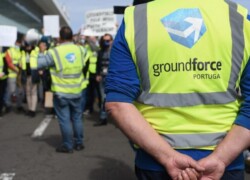 A 48-hour strike, by Groundforece, the Portuguese airport baggage handlers and ground personnel, canceled about 650 flights on Saturday through Sunday and Monday, mainly at the Lisbon Humberto Delgado airport.

Around 100% of workers have taken part in the weekend strike in Lisbon and Porto airports, the busiest airports in the country.

The Union of Airport Handling Technicians (STHA), representing Groundforce, has stated that additional strikes have been scheduled for July 31, August 1 and 2.

Groundforce workers are also staging an overtime strike until October 31. Workers could also protest by refusing to work the first and last hour of each shift.

The strike, which affected thousands of passengers, is part of an ongoing financial dispute between the Portuguese operator Groundforce and the flag carrier TAP Portugal.

A spokesman for STHA has stated that upcoming stoppages will affect mostly the airports of Lisbon, Porto, Faro, Funchal and Porto Santo, while assuring that the minimum services will be ensured.

According to TAP’s CEO, Christine Ourmières-Widener, ANA airports authority and TAP have both appealed to Groundforce to call off this industrial action. If it continues, it won’t just impact on passengers, but on workers of Groundforce and TAP – two companies already in serious financial difficulties.

Portugal has restrictions on travel for people flying from the USA. Accordingly, only Portuguese citizens living abroad, Portuguese residents, and European nationals can enter the country.. Other travelers are expected to comply with restrictions, such as professional requirements, studies, or family visits.

All passengers traveling must have COVID negative results within 72 hours of departure. For further information concerning traveling to Portugal from North America visit the US Embassy in in Portugal online.