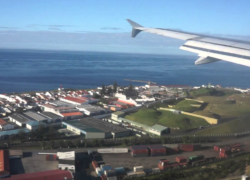 The Autonomous Region of the Azores witnessed a 97.5% increase in passengers arriving at local airports in August.

The numbers, revealed by the Regional Statistical Service of the Azores (SREA), draw a comparison between last month and the same period in 2020.

According to the SREA, 200,121 passengers disembarked in August, of which 105,485 from inter-island flights, 79,788 from flights originating in other regions of the national territory and 14,848 from international flights.

In the period between January and August, it was in inter-island flights that the biggest increase was registered in relation to the same period in 2020, with an increase of 79.2% in the number of passengers disembarked, from 209,464 to 375,367.

“By island, in terms of year-on-year variation, in the first eight months of 2021 all islands show positive variations, with Flores having the largest variation, with 97.2%, and the smallest variation being Santa Maria, with 51.1%,” revealed the SREA.

According to SATA Azores Airlines, August registered “the highest number of seats ever used in a single month.”

SATA Air Azores is the only airline that provides connections between all the nine islands of the archipelago and the only air carrier offering direct flights between the Azores and North America.