Travel: A room with a view at Pensão Flor de Coimbra – Portugal 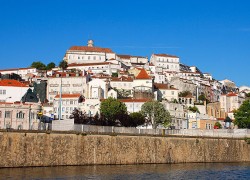 E.M. Forster’s novel, A Room With A View, opens in the dining room of the ‘Pensione Bertolini’. Charlotte Bartlett, travel companion and chaperone to her cousin Lucy, complains that she has not been given a room with a view of the river Arno as promised. Overhearing the conversation, a Mr. Emerson offers-up his rooms to the disgruntled new guests.

For many Americans this scene, captured masterfully in the Merchant Ivory film version of the book, is the first glimpse into ‘pension,’ or boarding house, life. More than a Bed & Breakfast, these traveler houses had full kitchens and guests would choose a meal plan. Lodgers sometimes stayed for weeks rather than days, and would return year after year. 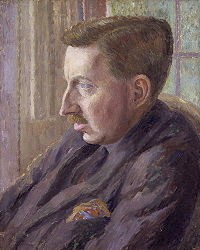 My partner and I found ourselves in Coimbra, Portugal, after a grueling day of driving from Lisbon that included stops in Colares, Sintra and Fátima. We were eager to find a place to stay that was convenient. As luck would have it, a hotel named Pensão Flor de Coimbra popped-up on an Internet search near our parked car. 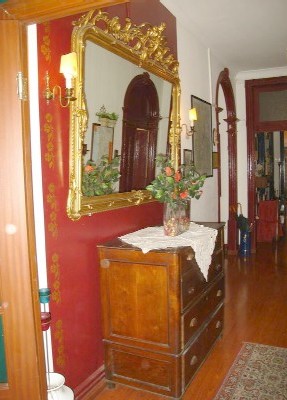 Entrance of Pensão Flor de Coimbra where an antique Napoleonic mirror takes center place at the top of the main staircase.

After a few minutes searching for the address, we walked up the pensão’s wide steps to a forbidding entrance and rang the buzzer. A disheveled, Dickensian Jerry Garcia answered the door. He seemed to consider not letting us in, but then waived us into a long, dark hallway.

There were spare, cheap rooms upstairs and larger rooms with their own bathrooms on the main floor. The smell of pot roast wafted down the hall, which the man explained in good English was lamb cooking for dinner. We took one of the larger rooms ($50 euros, cash only), and indicated we would also dine.

Wheeling our luggage down the hall, we passed a midwestern American couple lounging blissfully on a balcony overlooking the street below. “We adore it here,” said the wife unsolicited. “We had plans to move on, but we’ve stayed an extra two days,” explained the husband.

This was a bit too friendly after our long day of driving, and we politely shut our door and sprawled on the bed.

I soon went to see if I could find a refrigerator to chill a bottle of Arenae malvasia we had brought from Colares. We needed to drink it because it wouldn’t survive traveling in our car the following day.

As I reached the other end of the hall, a man appeared with a towel slung over his shoulder merrily humming opera. He accepted the bottle swiftly and stashed it in the recesses of an overloaded icebox from the 1960s.

Here I caught a glimpse of the stunning kitchen, tiled in blue and white, with a modern range under a chimney supported by four columns. At one time the room must have sported an open fire. 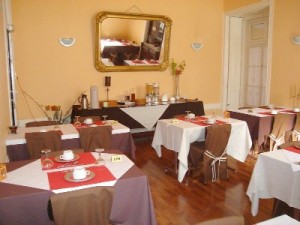 The dining room set-up for breakfast.

After we showered and readied ourselves, we joined the other guests of the pensão in the dining room. The scene was Forster brought to life. There was a scowling French couple, a stiff young English pair, a table of happy Portuguese and the midwestern couple beaming in our direction with familiarity. It was a small room with five tables and many eyes. Relaxing fado music soothed our travelers’ nerves.

The operatically inclined man with the towel now informed us that he was our waiter, Jorge. He then placed the customary starters of bread, meat and cheese on our table and gave us time to peruse the well-worn menus. These listed a number of dishes, but Jorge ably guided us to the ones that were available. We noticed that no matter what anyone ordered, the same lamb and fish dishes appeared.

The meal was one of enchanting theatricality– both because of the other guests and also our shared, masterful waiter. The food was exquisite and accomplished, and we lingered long past the other diners over our ruby port. 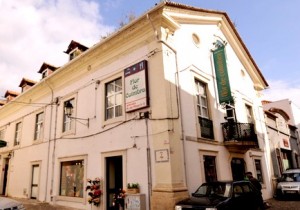 It was then that Jorge informed us that his was the oldest ‘pensão’ in Coimbra. He played front of the house while his older brother Eduardo–who had answered the door–was chef. The brothers traded sleeping in the pensão; one spent the night while the other went home to his family. It had been done this way, every day, without closing, for over thirty years.

“Food,” says Forster, “is a link between the unknown and the forgotten.” The discussion of sustenance and sleep appears in his lecture, ‘People,’ collected in the book Aspects of the Novel. In the lecture, Forster famously describes the difference between flat and round characters. He defines round characters as ‘capable of surprising in a convincing way.” They have, he says, “the incalculability of life . . . life within the pages of a book.”

Forster explains that it was Jane Austin’s genius to create characters that are “ready for an extended life, for a life which the scheme of her books seldom requires them to lead, and that is why they lead their actual lives so satisfactorily.” Her characters, which Forster takes as exemplary of all good novel characters, exceed the pages of the book.

The malvasia from Colares was almost chilled from its four hours in the ancient icebox, and we now invited ourselves to sit and share it with the brothers. They were in a small backroom, seated on the same side of a table watching the evening news.

The brothers told us the story of their ‘pensão’, and of how they took it over from their mother, a fearsome matriarch. It had been in operation since 1930. The kitchen once had a cauldron and open fire, and was the first in the city to be converted to gas.

Much is made in Forster’s novel of the differences between static characters and dynamic ones. The interaction of the two types is used to highlight changes in the social norms of the time in which the story is set—between characters that are Victorian holdovers and those that are modern. Lucy is the protagonist, and in the book the witty Reverend Arthur Beebe attributes her adventurous spirit to “too much Beethoven.” 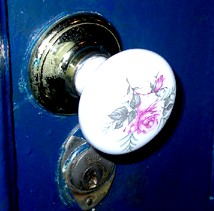 For all the weak interior monologue Forster ascribes to this character, Lucy plays piano ably. And not fluff pieces. She plays Opus 111, Beethoven’s last piano sonata. Critics take this as symbolic of her character’s desire to break free of the static female roles available to her; she wants to join the masculine world of action.

We drank the impressive bottle of malvasia while eating pastries purchased from nuns outside Fátima. These treats pleased the brothers, and we were happy to offer something they might enjoy as otherwise, to them, we were only two more flat characters passing through Coimbra.

James Wood in his book, How Fiction Works, takes issue with Forster’s division of characters into flat and round. He makes the point that the division necessarily privileges novels over short stories–because shorts lack the space to develop roundness. Wood instead argues that what makes characters vital is the author’s own interest in them, the subtlety with which they are drawn, and whether or not the author has convinced the reader of the world in which the characters exist.

Breathtaking insights are possible in a few short pen strokes, Wood argues, but we need to feel first that “a character’s actions are deeply important, that something profound is at stake.”

We stayed up late into the night talking with Eduardo and Jorge. We quickly found that we all shared common interests, and that our outlook on the world and the changes within it were similar. They told us about Coimbra Fado—more classical than Lisbon’s and sung only by men—and about the exceptional, hidden things they love in Portugal: the remaining continuously active synagogue, the cliff jumpers at Linhares, the underground museum in Beiras. 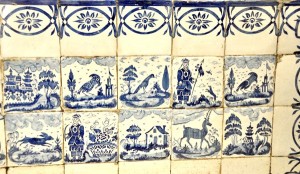 Eduardo took us on a tour of the kitchen, covered in Japanese tiles from the 16th century. These were some of the first items to ever leave Japan on Portuguese trading ships. Eduardo cooks next them, fearful that attempting to relocate the tiles to a museum would damage them. They were painted with detailed scenes of medieval Japanese life.

When Eduardo showed me a map of Portugal, he described areas not in terms of how they have developed, but rather of how they have been wrecked. He confirmed that Trás-os-Montes in the northeast—where we are anxious to go—had not yet been ‘ruined’ or ‘modernized’ by the flood of EU capital. He is an ardent preservationist, an unexpectedly kindred spirit.

Both brothers complain that the old ‘pensão’ ways are dying-out. Instead of eating a full meal, instead of staying the night or a fortnight, people show-up because they have read an online review of their desserts. They kick such barbarians out.

But the charmingly decrepit state of the boarding house is a sign that this attitude has taken a financial toll, and that the Flor de Coimbra may not survive until the brothers’ children take over.

James Wood’s critique of Forster makes valid points within its academic confines. But it feels disingenuous by giving such short shrift to Forster’s larger thoughts regarding what makes characters lifelike. Forster does not fear bold, quasi-mystical statements that impart real wisdom about the human condition. It is one reason why Aspects of the Novel is compelling and still so widely read.

Forster ends his lecture, ‘People,’ with sagacious insight into the twin acts of writing and reading. It is worth quoting in its entirety:

“We cannot understand each other, except in a rough and ready way; we cannot reveal ourselves, even when we want to; what we call intimacy is only a makeshift; perfect knowledge is an illusion. But in the novel we can know people perfectly, and, apart from the general pleasure of reading, we can find here a compensation for their dimness in life. In this direction fiction is truer than history, because it goes beyond the evidence, and each of us knows from his own experience that there is something beyond the evidence, and even if the novelist has not got it correctly, well—he has tried.”

The full import of this statement takes time to settle-in. I do not presume that it has settled-in for me yet, years now after first reading it. Forster here reveals his struggle with the sadness, the metaphysical poignancy, of the fact that we are fundamentally opaque to each other—and to ourselves.

This keen awareness is a legacy of the 19th century—of those ‘masters of suspicion’ Marx, Nietzsche and Freud–and one that we have yet to sort out. When today’s fiction makes a rare attempt to, it often does so in a cheap and muddled way.

Like Austin’s parlor-book characters that he admired so much, Forster’s unassuming ‘pensione’ guests reveal vast things about us. We read along as they interact not only with each other but also with their own cloudy interiority– and are ourselves illuminated.

In the morning, as we prepare to leave the Flor de Coimbra, I astonish myself by hugging Eduardo with the affection reserved for dear friends. He dotes on us as we prepare our luggage, pointing out more things on the map that we must visit.

The Midwesterners have already departed, but not before slipping their phone number under our door.