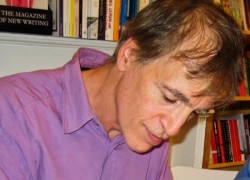 Richard Zenith, 56, was awarded the 2012 Pessoa Prize. Zenith was praised for his research and translations of Portuguese Modernist poet Fernando Pessoa.

American born, Zenith has become “a citizen of Portugal out of his dedication and commitment to his work, to Fernando Pessoa, to literature, our own, and to a language, Portuguese,” said president of the awarding jury, Francisco Pinto Balsemão, at the award announcement ceremony.

Born in Washington, DC, USA, Richard Zenith has become a citizen of Portugal tree years ago. He graduated from the University of Virginia and lived in Colombia, Brazil, and France, before settling in Lisbon in 1987. He has since freelanced as a writer, translator, researcher and literary critic. Currently, Richard Zenith is writing a biography of Fernando Pessoa.

In addition to translating many of the works of Pessoa, Zenith is also responsible for English translations of works by Portuguese authors,including Camões, Sofia de Mello Breyner, António Lobo Antunes, Nuno Júdice and Antero de Quental.

The 2012 Pessoa Prize, worth 60,000Euro, is awarded annually to a person of Portuguese nationality who has made a particularly significant and innovative contribution to Portugal’s artistic, literary or scientific life.