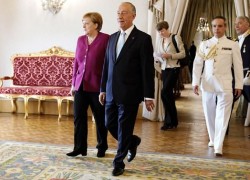 The President of Portugal, Marcelo Rebelo de Sousa, criticized President Donald Trump’s trade policies as “rules only for some and only sometimes,” adding that Portugal would like to “continue to trust the United States of America.”

“When there are rules, they should be for everyone and for always (…) otherwise it is not possible to have international trade rules, “ Marcelo Rebelo de Sousa said after being asked to comment on President Ronald Trump’s decision to suspend the exemption on import duties of steel and aluminum from the European Union, Canada and Mexico.

President Trump’s trade policies impose steep tariffs on metals imported from its closest allies, including the European Union, Canada and Mexico which will face 25% tariffs on steel and 10% on aluminum.

As trade tensions escalate, Europe, Canada and Mexico are threatening to respond in kind, raising the potential of an all-out trade war.

Visiting Portugal last week, Chancellor Angela Merkel of Germany called the tariffs “illegal,” while saying “the measures carry the threat of a spiral of escalation that will result in damaging everyone.”

Merkel’s visit was related with German investments in Portugal namely the Bosch center of development and technology in Braga city , Autoeuropa, and the German multinational in Palmela city  producing the new Volkswagen T-Roc. Germany is one of Portugal’s biggest foreign investors.