Tourism is on the increase – Madeira 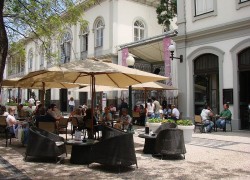 There were 151 ships that paid a call to the island of Madeira in the first five months of 2011, 14 more than in the same period a year ago, revealed the Madeira Port Authority (APM).

In the first five months of 2011, the port of Funchal had a 10 percent increase in the number of visiting cruise ships, and 17.7 percent more passengers compared with 2010, the APM said.

Cruise ships normally visit Madeira for a day. Most of the visiting ships are on their way between the Caribbean and the Mediterranean. The average of cruise ships passengers visiting the island is estimated at 300,000 a year.

According to recent statistics released by Madeira Airport Authority, the air traffic also increased in contrast to the downward trend experienced on the island last year.

Recent figures show an 8.9 percent increase in airline passengers, representing a growth of 13 percent of seats occupied on each flight. Air travelers stay on the island an average of 6.5 days.

Madeira’s economy suffered a downturn last year due to adverse extreme weather conditions such as floods and ash clouds.