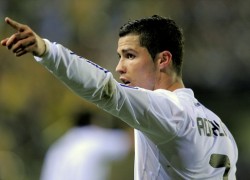 Real Madrid Portuguese footballer Cristiano Ronaldo was officially awarded Friday with the prestigious “European Golden Shoe Award” for finishing the 2010-11 season as the top scorer of all European leagues.

This was the second Golden Shoe trophy won by Cristiano Ronaldo. He first won the award – formally called “Golden Boot” – in 2008 when he scored 31 goals in one season for Manchester United.

Last term, Ronaldo scored more times than any other player in a European first-tier league division by achieving 40 goals in Spain’s La Liga Real Madrid. He scored his 100th goal in a Madrid shirt this week. He is known as the first soccer player to win 80 points on his to the award and is the eighth player to win it twice.

The award was presented by Portugal legend Eusébio and Real Madrid honorary president Alfredo Di Stefano. On receiving the award, Cristiano Ronaldo said, “I would like to win something bigger at a collective level. I do not think about breaking records, but about Real Madrid. I think our team is more mature and with more trust, and we all have to think the same way to achieve an important goal.”

The Golden Boot is presented every year by European Sport Media (ESM), an organization which includes 10 European sports publications, to the top scorer in Europe.

Cristiano Ronaldo’s mother, and his model girlfriend Irina Shayk, were among the hundreds of people who attended the awards ceremony. Irina displayed a huge engagement ring while the famous couple is reported to have been engaged in February this year after Ronaldo reportedly proposed on Valentine’s Day.

Cristiano Ronaldo was also nominated last Tuesday among 23 finalists for the 2011 FIFA Ballon d’Or award, the football’s global governing body announced Tuesday. He was awarded the Ballon d’Or award for the first time in 2008.

Cristiano Ronaldo,  a native of Madeira island, is a Portuguese footballer who plays as a winger or striker for Spanish La Liga club Real Madrid and is the captain of the Portuguese national team. He won world player of the year in 2008. Ronaldo became the most expensive player in football history after moving from Manchester United to Real Madrid in a transfer deal worth £80 million (€94m, US$132m).