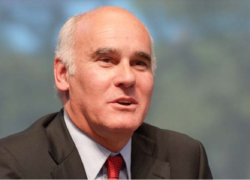 João Vale de Almeida, the distinguished Portuguese diplomat, currently serving as the European Ambassador to the United Kingdom, is facing the extremely challenging task of trying to reconcile all sides to the bitterly divisive Northern Ireland protocol.

Born in Lisbon, he graduated from Lisbon University with a degree in history and then spent seven years training and working as a journalist in several foreign countries before joining the European Commission in 1982. He held a number of senior positions, including director general of external relations of the European Commission, the EU’s executive body. He was assigned to Washington from 2010 to 2014 as EU ambassador to the United States and then from 2015 to 2019 as the ambassador to the United Nations.

He became the EU’s first post-Brexit ambassador in London at the beginning of 2020 just as Britain was about to formally leave the union. Now aged 65, he is married with two children and has recently become a grandfather.

The outcome of the highly controversial Brexit referendum saw the ‘leavers’ win with a small majority, 51.9% to 48.1%. The most significant areas in which citizens voted to remain were Scotland, 62% against 38%, and Northern Ireland, 55.8% against 44.2%.  These results are echoed in current wishes among many in Scotland and Northern Ireland to leave the United Kingdom.

That aside, while the UK officially left the EU in January 2020, a period of transition was completed at the end of that year with the signing of a Trade and Cooperation Agreement. It contained a legally-binding understanding that there would be no border checks between the North and the Republic of Ireland lest they endanger the Good Friday Peace Agreement signed by the Irish and British governments in 1998. It was believed such checks would likely have led to more sectarian violence as in ‘the Troubles.’

So, what’s all the fuss about now? you may ask. In simple terms, the Brexit agreement included replacing the land border between the north and south of Ireland with a virtual border in the Irish Sea between Northern Ireland and the rest of the UK to impose certain restrictions on trade.

The Democratic Unionist Party, long the most popular party in Northern Ireland, totally rejects being separated from Britain in this way. Under DUP pressure, Prime Minister Boris Johnson, who signed the 2020 treaty but has since made conflicting statements about the protocol, has indicated he may try and scrap the protocol altogether.

The situation has become more complicated because of the outcome of this month’s Northern Ireland Assembly election. For the first time, Sinn Fein, the republican, pro-Irish unity party won with 29% of the votes, placing the DUP second with 21.3%, a substantial loss.  The result made Sinn Fein’s leader, Michelle O’Neill, eligible to become first minister and the DUP’s Sir Jeffrey Donaldson second minister in the Northern Ireland Assembly in Stormont.

Sir Jeffrey has dug his heels in and adamantly refused any such power sharing until the protocol is done away with. Last Saturday, he said promises about the protocol should have been delivered sixteen months ago. In denouncing the DUP’s attitude, Michelle O’Neill said the opposition party’s refusal to allow a functioning assembly would “punish the public”. The assembly will remain in limbo unless and until London and Brussels come up with a solution.

Ambassador Vale de Almeida made the EU’s position clear by insisting that the UK had failed to come up with any credible alternative to the agreed protocol. He has called upon unionists to make the protocol work rather than fighting against it. He has pledged Brussels’ commitment to flexibility on the implementation of the protocol if the British government demonstrated good faith.

He and his team have long been working on the problem and will now be all the busier because there seems little let-up up in what has developed into very much more than an international squabble.

Various senior lawyers have scorned UK’s Foreign Minister Liz Truss’ claim that the protocol can be scrapped because the UK can dump parts of the Brexit treaty without the EU’s agreement. Liz Truss’ opinion is reportedly based on that of Britain’s attorney general, Suella Braverman, who believes the protocol is being unfairly enforced by the EU.

Ambassador Vale de Almeida will presumably be concentrating on understanding and explaining in detail both sides of the agreement, including that of EU leaders who have recently warned Britain to back away from its threats to override the Northern Ireland Brexit deal.

The protocol has become a war of words. Ambassador Vale de Almeida would probably like to focus much more on joint action by the EU and the  UK and the real war in Ukraine.