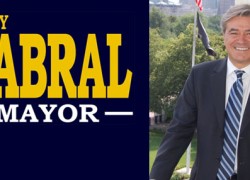 In a press conference, speaking to a crowd of supporters, Tony Cabral said he is committed to boost public safety, improve the city’s schools and stimulate the economic growth of the city.  He said, “I see the glory of New Bedford’s past, but we must create its future.”

Cabral, 56, who was born in the island of Pico, Azores, came to the United States at the age of 14.  He said, “None of us spoke English,” and he told the crowd, “We had neither money nor connections nor an understanding of what life here would be like. So my parents survived by clinging to a promise, to America’s promise: that through hard work and education, their children would succeed.”

A former school teacher, Cabral said, “We must remember that education is the DNA of economic development,” and he added, “I see a future where working families enjoy strong schools, safe streets, and good jobs, a future where hard work and innovation spur the economy, and a future where neighbors work together to make New Bedford the economic engine of the South Coast.”

Cabral, who was first elected to the House in 1990, currently serves as the chairman of the Finance Committee on Beacon Hill. Recently, Rep. Tony Cabral was appointed to serve on the joint legislative committee on redistricting, a powerful position in the drafting of the  new district lines for all Massachusetts state representatives, state senators and U.S. congressmen for the next decade. He was elected in 2010 for an 11th term as a Democrat from Massachusetts 13th Bristol District

Cabral is running against Ward 1 City Councilor Linda M. Morad and Assistant U.S. Attorney Jon Mitchell. Current three-term Mayor Scott W. Lang has indicated he will not seek re-election. The city primary will be held on October 4. The mayoral election is scheduled for November 8.

About 40 percent of city residents say they are of Portuguese ancestry. Other ethnic groups include the Irish (8.2%), the Cape Verdean (10%), Hispanic (16%) and French-Canadian (14%). The population of New Bedford is estimated at 95,072, making the city the 6th largest in the state.