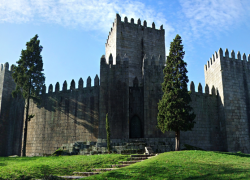 The Day of Portugal is a national holiday celebrated by the Portuguese nation every year on June 10. The date also celebrates the life of Luis Vaz de Camões, Portugal’s national poet.

While Camões has been compared to Shakespeare, Vondel, Homer, Virgil and Dante, his epic poem the The Lusiads is considered one the most important works in Portuguese literature and an iconic symbol for the Portuguese nation.

It is estimated that 5 million Portuguese nationals live abroad. The total resident population of Portugal is estimated at 10,560,000 (2011).

Google users in Portugal will find today a new doodle featuring the Guimarães Castle, a medieval castle in the northern region of Guimarães, believed to be over 1,000 years old and associated with the foundation of the country.

Since 1998, Google doodles are known as the decorative changes that are made to the Google logo to celebrate holidays, anniversaries, and the lives of famous artists and scientists.