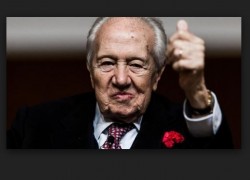 The former President of the Portuguese Republic, Mário Soares, died in Lisbon today, January 7, at age 92. Hospitalized on December 13, he had since been in a coma. The cause of dead was not disclosed. The Portuguese government has decreed three days of mourning.

President Soares was a historic figure in the struggle to establish parliamentary democracy in Portugal in the 1970s. He also guided the country through the process of decolonization of the Portuguese empire in Africa and Asia and the integration of Portugal in the European Union.

One of modern Portugal most influential politicians, he lead the country to its first democratically elected government in 1976, following a military coup in 1974 – The Carnation Revolution – which toppled the totalitarian four-decade fascism inspired regime headed by António Oliveira Salazar.

Following the Carnation Revolution, as a member of the provisional government, he signed in 1974 the treaty recognizing of India’s sovereignty over Goa, Daman, Diu, Nadra and Haveli. He also negotiated the independence of the former Portuguese colonies of Angola, Mozambique, Cabo Verde, Guinee -Bissau, Sao Tome and Principe and East Timor.

In a statement, the Socialist Party announced, “Today Portugal lost its father of liberty and democracy, the person and face the Portuguese identify most with the regime that was born on 25 April, 1974.”

“The loss of Mário Soares is the loss of someone who was irreplaceable in our recent history. We owe him a lot,” fellow Socialist, Prime Minister António Costa, said in New Delhi, in India, where he is on a state visit.

Former Portuguese Prime Minister, António Guterres, the new United Nations secretary-general, eulogized President Soares as “one of the rare political leaders who had real stature in both Europe and the world.”

Mário Soares, was born in Lisbon, on December 7, 1924. He graduated in History and Philosophy from the University of Lisbon where he also completed a Degree in Law. A lifelong political activist, as a lawyer he often defended political insurgents during the Salazar dictatorship. He was persecuted and jailed 12 times and exiled for his political actions.