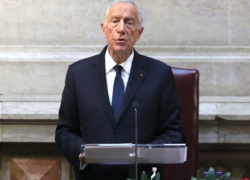 Since 1974 the Portuguese nation has been celebrating “Dia da Liberdade” [Freedom Day], with a national holiday on 25th April Revolution, to mark the bloodless military coup which brought democracy and civil liberties to modern Portugal.

This year, due to the COVID19 epidemic, the celebrations have been simplified to a shorter non-public ceremony in the Portuguese Parliament [Assembleia da República] presided by the President of Portugal Marcelo Rebelo de Sousa, the President of Parliament Eduardo Ferro Rodrigues, and Prime Minister António Costa.

Cabinet members, parliamentary deputies and a limited number of invited guests were also present. Instead of the customary 700 people, only about 100 were present. The traditional parade and other national festive displays were cancelled.

Currently under the state of emergency, the Portuguese Government is considering decreeing a state of calamity in Portugal as of May 3.

Also celebrated as the Carnation Revolution, the event of April 25th came about after almost five decades of an authoritarian regime led by Oliveira Salazar, lasting from 1937 to 1974.

Supported by the civilian population, the revolution changed the Portuguese political system from the authoritarian rule to a modern democracy.

The military coup was undertaken by the Armed Forces Movement (MFA) led by General Antonio Spinola and other prominent civilian and military leaders.

In a matter of hours, General Spinola was handed the surrender of the ruling Prime Minister Marcelo Caetano who was overthrown and forced into exile in Brazil.

In 1974, more than half of Portugal’s government budget was spent with the military engaged in wars in three of Portugal’s colonies in Africa.

Following the revolution, according to the Portuguese Constitution of 1976, a parliamentary republic was established. Portugal has since been governed by a constitutional democracy with a president, a prime minister, and a parliament elected in multiparty elections.

Over the course of the next decades a stable two-party system was established and consolidated. In 1980, the archipelagos of Madeira and the Azores became autonomous self-governed regions.

Portugal remains one of the poorest countries in Europe and of the European Union. Unemployment fell below 8% in December (2017) for the first time in more than 13 years. In 2018 the minimum wage was fixed at €676 per month and is currently at about €700.

In 2015, the Organization for Economic Co-operation and Development (OCDE) reported the gap between rich and poor in Portugal as one of the most unequal, ranking 9th out of 34 countries measured.